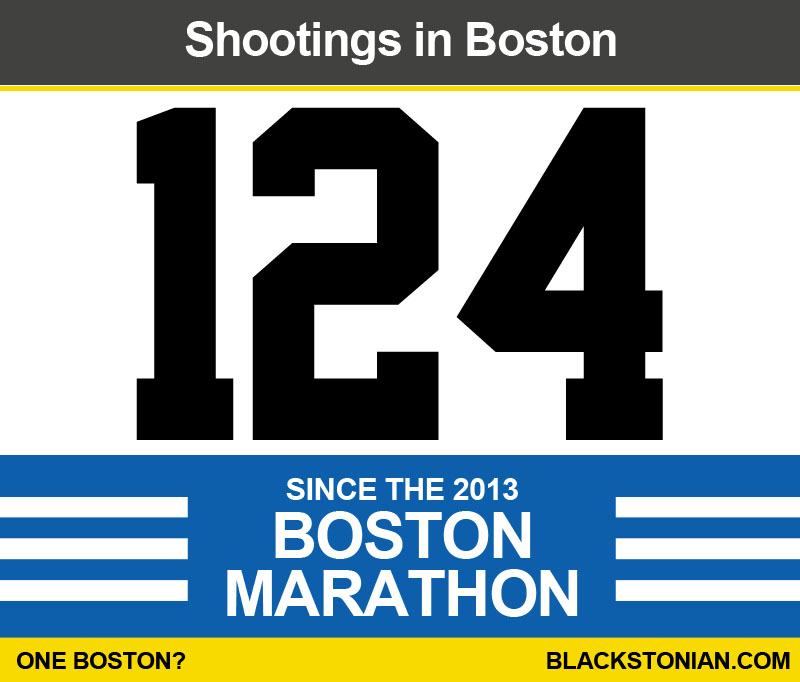 An article in the NY Times entitled “Violence Rises in Boston Off the National Stage” covers our work with the Blackstonian to keep track of Shootings Since the Boston Marathon in a piece discussing the rise of violence in Boston since the Marathon and the relative lack of attention it gets.

BOSTON — The Boston Marathon bombings produced an outpouring of attention to this city, but in violence-prone neighborhoods like Roxbury and Dorchester, some say the attention has made them feel only more isolated.

“Since April 15, we’re at over 115 shootings,” a city councilor, Tito Jackson, told a Boston police officer from the department’s gang unit at a public safety meeting at a Roxbury community center late last month.

April 15 was the day the bombs went off at the marathon, killing three people and wounding more than 260, resulting in a widespread manhunt, a national outpouring of shock and sympathy, and the creation of a fund that has raised $60 million to help the victims.

In the nearly five months since the marathon, however, community activists, clergy members and others have used the mounting tally of shootings to call attention to the everyday reality of violence and to push for measures to address the weapons trafficking, gangs and fundamental mistrust between the community and the police that they believe contribute to it.

“When three people die, because it happened in the downtown area, where the tourists come, that gets the attention, that gets the state of emergency,” said the Rev. Bruce H. Wall, the pastor of the Global Ministries Christian Church in Dorchester, who has discussed the issue on his radio program. “It’s that pain that we have to live with.”

The tally — which rose to 124 with a shooting in Mattapan on Thursday — is showcased daily in an image designed to look like a marathon runner’s number on Blackstonian.com, a Web site aimed at black Bostonians. The image, which has spread on Facebook, Twitter and other social media, was created by Jamarhl Crawford, a writer and graphic artist who is running a write-in campaign for Mr. Jackson’s council seat and who convened a rally at City Hall last month to mark 100 shootings since the marathon.

After the event he led more than 40 people to Mayor Thomas M. Menino’s office to request a meeting with his staff about gun violence; no meeting has been scheduled, although the mayor has since attended other events aimed at raising awareness about gun violence.

“It is almost indicative of that classic tale, the ‘Tale of Two Cities,’ because I don’t believe there’s one Boston,” Mr. Crawford told the crowd, referring to the “One Boston” slogan that emerged after the bombings. “There’s at least two.”

Even Senator Elizabeth Warren alluded to the violence since the marathon in a recent e-mail to supporters urging stronger gun control laws. “If 100 people went to Massachusetts General Hospital with a mysterious virus in four months, we would treat it as an epidemic,” read the message. “There would be headlines, alarms and calls for action.”

As of Aug. 26, there were 185 shootings in Boston this year, compared with 164 during the same period last year. That is well below the more than 400 shootings a year that took place in the early 1990s, but it is likely to overtake the fewer than 200 shootings a year recorded during most of the late ’90s.

Many activists have called for stronger gun laws and better tracking of guns, as well as efforts to create better relationships between officers and the neighborhoods they patrol, citing a campaign by the Massachusetts Association of Minority Law Enforcement Officers to increase the number of high-ranking black officers in the Police Department.

The group recently took a “no confidence” vote in the department’s commissioner, Ed Davis, who has defended his record on race. Both the association’s president, Larry Ellison, and Mr. Wall say they will urge their supporters not to vote for candidates in this fall’s mayoral election who seem content with the status quo.

In an interview, Mr. Davis acknowledged the disparity in the response to the bombing, which included scores of federal investigators, and the city’s daily violence, which disproportionately affects minority neighborhoods. But, he said, “to try to equate it to a terror attack — it’s difficult to compare the two.”

Still, he added, “I really think there needs to be more federal recognition” of everyday urban violence in the city.

As she watched the search for the bombers unfold from her home on the border between Dorchester and Mattapan, two neighborhoods with high rates of gun violence, Kim Odom, a 50-year-old pastor, thought of her son Steven, who was 13 when he was shot and killed in 2007, just steps from their home.

“I can remember sitting on my couch and thinking to myself, Wow, did they do this the night that my son was killed?” said Ms. Odom, who has become a vocal violence-prevention activist since the murder. “Was there such a task to find the perpetrator that took my child’s life that night?”

Many speaking out say they do not mean to diminish the pain of the bombing victims and their families. “How do you even begin to talk about it without sounding insensitive?” said Mona Lisa Smith, the president of Mothers for Justice and Equality, which works to curtail urban violence.

But such violence, she added, is “our reality, for all of these families, every day.”

A version of this article appears in print on September 7, 2013, on page A16 of the New York edition with the headline: Violence Rises in Boston Off the National Stage.